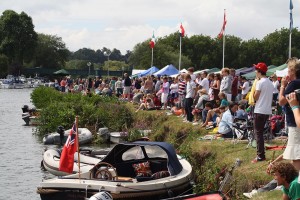 Wargrave and Shiplake are two small villages either side of the Thames, in England, some three miles up river of the famous rowing town Henley. Each year they hold one of the largest regattas on the Thames with races for skiffs, punts and canoes. A list of all the events can be seen on our Winners page. It is a local regatta, but each year friends, distant relatives, former residents and the plain interested come from all over Britain and distant corners of the globe to compete, meet friends and family and soak up the pleasure of simply mucking about in boats. That is not to say that the competition is not serious and that the standards of traditional rivercraft are not of the highest order.

There are very nearly 1000 individual competitors competing in 400 races over two days at the beginning of August, every year. The course is short, around 400 yards, down stream, but still arduous. The boats are traditional in style and heavy. 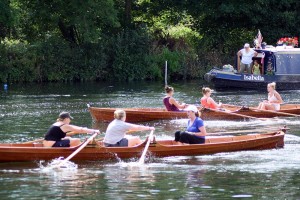 The skiffs (clinker built, double sculled, fixed pin and seat, coxed) would have been nearly identical in Victorian times but remain superb racing machines when up and running. They are sculled at Wargrave & Shiplake by combinations of first timers, local veteran gentlemen and Olympic and university oarsmen, success being dependent on skill rather more than weight. There are events for boys, girls, ladies, gentlemen, mixed and veterans.

The canoes are Canadian canoes, open topped and paddled kneeling just as Davy Crocket did only 25 years before the first regatta. Ours are no longer made of wood, but are moulded in fibreglass in the same shape as the regatta’s last wooden canoes which were built in the 1930’s. Canoes are raced in singles, mixed pairs and boy and girl. To make sure that the regatta stays lively we also have races of punting in canoes, in singles and, believe it not, in doubles. 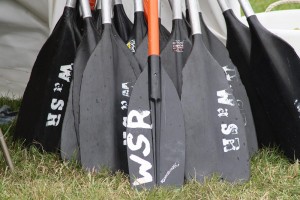 The main punting events are held in 2 foot punts, that is 2 foot wide, 32 foot long. The races are over two or four legs of a 100 yard/metre course. At each end of the leg there are two wooden posts, pecks, around which each punt must pass, simply by reversing direction. Easy to watch and admire, harder to achieve at full racing speed. The wide variation in skill in punting causes Wargrave & Shiplake, along with other punting regattas, to handicap competitors to provide more interesting racing. We also have “scratch” events, races with no handicaps, for novice punters.

Many competitors in the regatta started competing in dongola races, in which three crews of six paddle wider, three foot, punts kneeling. The event is highly social, highly competitive and completely exhausting in spite of being over a short course. There are events for the under-12s, under-17s, veterans and everyone else, including those who just turn up (early) on the day.

Dinghy races are held for the under 12s, under 15s, and ladies.